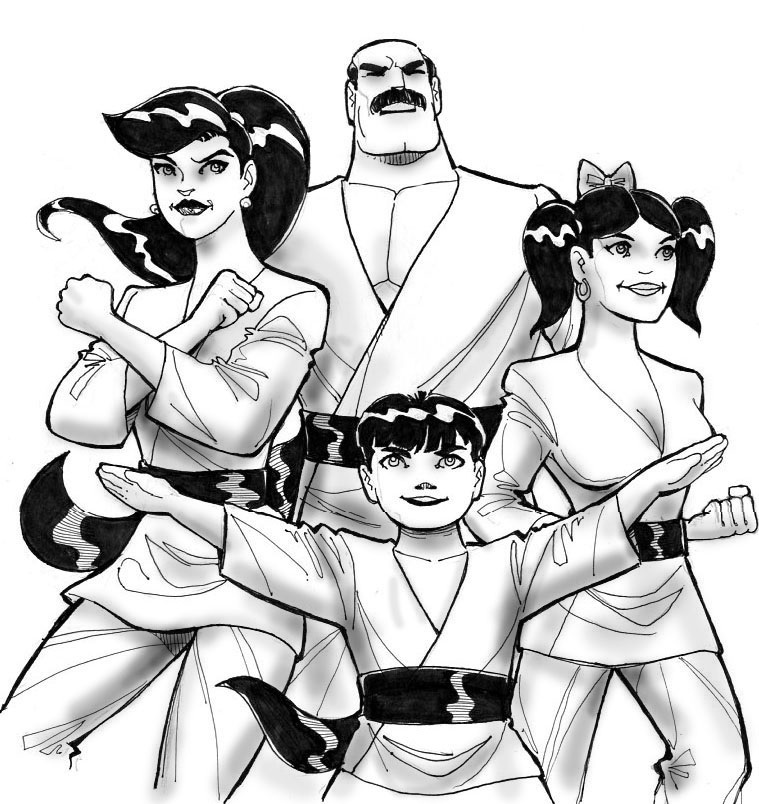 Kung Fu Family Rules! It’s a statement and the name of the rule set for a miniatures game and a new line of Heroic-Sized miniatures compatible with 25-34 mm and plastic click figures. Left Hand Miniatures will be the sole seller of the miniature line and will also provide access to the KFFR! rule book. Kung Fu Family Rules! is a tabletop tactical miniatures game and role-playing game with elements of martial arts, super heroes, modern pulp-like adventure and horror. It can be played as single scenario combat game or in a story telling cinematic way with melee encounters, depending on the tastes of the game manager and players.Kung Fu Family is designed to focus on hand-to-hand, small-group (4-8 combatants on a side) tactical combat, although rules for using missile weapons and firearms are included. Players have the option to use the pre-rolled Kung Fu Family and enemy characters provided in the game or roll up new characters of their own design.

The completed Kung Fu Family Rules!, game mechanics for Kung Fu Family and tactical level or rules-lite RPG miniatures game will be fully illustrated and include a comic book version of the setting.The first 20 customers who buy the full two sets of miniatures, that is and , will receive a free pre-publish text version of the rules.

Feed back will be welcome and I will support play-testers as much as time and energy allow.